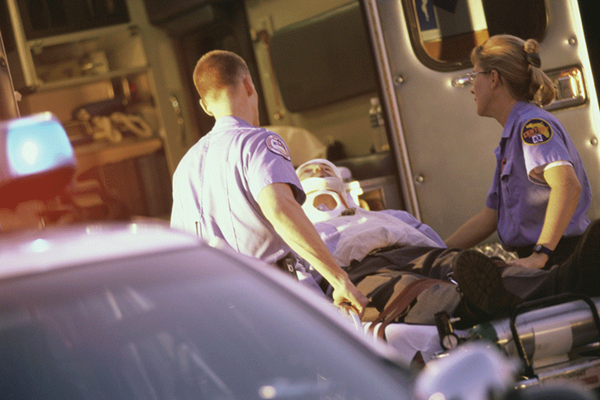 The Case for Prehospital and ED Use of Tourniquets

A 27-year-old male is brought in by ambulance after experiencing a gunshot wound to the mid right thigh. At the time of his arrival with EMS, he is pale, diaphoretic, and has pulsatile bleeding from his right leg. His vitals are a HR 135, BP 96/70, RR 30, and SpO2 100%. The intern applies direct pressure to the site, but the blood continues to pulse between his fingers and around his hands pooling on the floor. What do you do next?

The first step when addressing bleeding of any nature is direct pressure, as long as the site is accessible. If the bleeding is not controlled with direct pressure, a pressure dressing can be applied. Pressure dressings should be applied to a small area in order to not diffuse the applied force. Cast your mind back to pre-med physics and recall that pressure equals force divided by area, the greater the area, the lower the applied force. If these steps are unable to control the bleeding, a tourniquet should be applied.

Tourniquets are a device that can be used to rapidly apply proximal pressure, exceeding the patient's systolic blood pressure, to an injury in order to stop bleeding. They can be applied quickly in busy and frenetic surroundings, generally in less than a minute.

One of the more commonly used tourniquets is the Combat Application Tourniquet. It is the tourniquet currently utilized by the United States Armed Forces, and is increasingly finding its way into the civilian prehospital environment. It's application is essentially effortless, and can be applied by the patient on themselves one-handed, if need be. A loop is placed proximal to the injury and pulled tight with Velcro. Afterwards, a rod attached to an inner lining is turned until the device is tight and bleeding is stopped. This is placed within a small clip and fastened.

Another more-specialized type of tourniquet is the junctional tourniquet. This tourniquet has been designed to address the problem of hemorrhage at proximal sites like the axilla and upper groin, which are not amenable to traditional tourniquets. They are designed to be placed considerably more proximally than other tourniquet devices, and to apply pressure over the subclavian or iliac arteries. While increasing in use, there is still some debate about their efficacy.

There is little risk of adverse effects due to the application of a tourniquet. The literature is replete with examples of the benefits provided by tourniquet placement. While there are concerns about prolonged vascular occlusion – including venous thrombosis and thromboembolism, permanent neurologic damage, and tissue ischemia — most studies show these complications to be less frequent than originally thought, and demonstrate a distinct life-saving benefit which overcomes the potential harms. In many instances where there was harm associated with tourniquet use, it is unclear if this harm was the result of the tourniquet itself, or of the original traumatic injury.1 The real dangers of tourniquet application appear to arise when they are placed without clear indication for their use, which only risks adverse outcomes without benefit to the patient.

Further adding to the argument for their safety profile when appropriately used, tourniquet devices are quite commonly employed in the operating room for extended periods of time by many surgical specialties. While this anecdotal evidence from the operating room cannot be directly extrapolated to our use in the ED and prehospital environment, it adds to the known safety profile of these devices.

The data also indicates the tremendous opportunity for these devices to save lives. A retrospective Canadian study which looked at isolated extremity injuries in the civilian prehospital sector found that of 190 injuries, six patients died, all due to exsanguination which could have possibly been prevented with earlier application of a tourniquet. They found eight patients who received early tourniquet use, all of whom survived.2 A review paper in Prehospital Emergency Care examined the use of tourniquets in all environments. They recommended that tourniquets be moved to first line therapy in any mass casualty incident, which is in accordance with Advanced Trauma Life Support (ATLS) training.3

Kragh, in a review of extremity trauma in the military environment, found that patients were more likely to survive if they had a tourniquet applied. Additionally, they found a tremendous clinically significant decrease in mortality if it was applied prior to the onset of hemorrhagic shock. Like other studies, they also noted a very low complication rate.4

There are many barriers to adoption of tourniquet use. Although there is concern that the injuries sustained are different in the military and civilian populations, the cause of death — exsanguination — is the same. There is still a large population of providers who believe tourniquets to be dangerous due to the risks of significant complications, including limb ischemia, which have not been borne out in the literature.

Lastly, the National Association of EMS Physicians (NAEMSP) released their guidelines for prehospital hemorrhage treatment. They recommend the use of tourniquets as the next step in hemorrhage control, should direct pressure or pressure dressings not control hemorrhage.5

Tourniquets are a life-saving intervention that can be rapidly used in situations of exsanguinating extremity trauma. They have a low risk for adverse events when applied correctly, and should be used by EMS in correct indicated circumstances. Tourniquets can also be used in the ED to free up a provider or to stop bleeding not responding to direct pressure. The chances are your application of a tourniquet will decrease your patient's overall morbidity, and may even save their life.