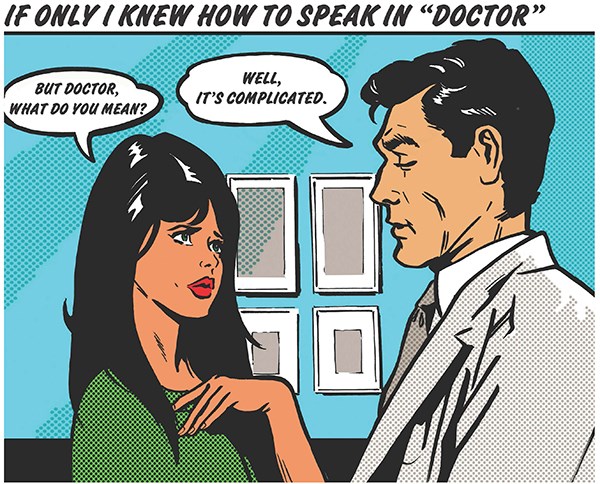 “Dude, he talked to me today!” I couldn't help but express my joy in what seemed to be a milestone achievement for our struggling 5-year-old ICU patient. For weeks he had been battling through a combination of iatrogenic-driven illness worsened by his persistent congenital difficulties. The rest of the team on rounds muffled giggles and some were silent; the attending looked perplexed.“Nobody here says ”˜dude' on rounds,” whispered my co-resident quietly, as she verbally nudged me in the ribs. After nearly a month at the off-site facility, perhaps I still wasn't “in-the-know.” It didn't change the fact that hearing this young man hoarsely squeak out his own name was essentially a modern-day miracle. I continued with my formal presentation, decidedly unperturbed by their reactions. Until then, I hadn't noticed that I am often guilty of common school-yard speech spilling into my medical circles, and that I am reticent to let the stream flow the other way.

We learn a lot through medical school and residency. That's something we should be proud of. When we come out the other end, we've learned more than facts and figures; we've learned a whole lot of vocabulary — it is as if we've learned an entirely new language. Even though we see patients every single day, it's easy to forget that they haven't been a part of the same linguistical journey we have. Leiomyosarcoma, pancreaticoduodenectomy, and polycythemia rubra vera all have more syllables than I can count – they are a mouthful. We can hardly expect our patients to follow our thought process when we speak like that. While these words do convey competence and signal to our colleagues that we're one of them, they often insert a wedge of distance between us and our patients.

Using our education in speech can sometimes become a barrier to patient emotions, and more often than we realize, restricts our own feelings.

Intellectual verbalization of tough scenarios seems to somehow separate us from them, and our big words can form an unconscious floodwall that protects us from the waves of discomfort all around us. This can keep us sane, but on the other side, it can keep us from being vulnerable when that's what we should be. We all strive to be the emergency physician who keeps the level head no matter what – that's an admirable goal. We work to internalize, analyze, and react appropriately to each scenario among the onslaught of varied emotions that come with our job. Our perseverance in many ways depends on our uncommon dialect, but I believe our humanity finds itself in much smaller terms.

I'm sure I couldn't count the number of times we were told in medical school not to use “medical jargon” with patients. My friend used to joke that he never would because he couldn't learn the words in the first place. I usually felt the same way. Nevertheless, those words of admonition never really struck home until I began to realize what words really are. They're more than the sounds that escape our mouths. Words carry meanings and intone ideas sometimes altogether different from their definitions. Words are only part of the conversation. Sometimes, words cannot be spoken, as I learned one day”¦

Surrounded by pictures of family, get-well cards, and personal effects from home, the 75-year-old grandpa almost looked like he was just taking a late afternoon nap. Despite the setting of the surgical ICU, the ventilator and drips all seemed to be out of place.

“See, here he is with our three grandkids; and there he is sitting in his favorite chair by the window.” His wife of more than 50 years and I were seated next to his bed, our knees nearly touching, as she passed me pictures of her husband from before the accident. I could smell the slight scent of perfume and noticed that she was wearing nice shoes – she had dressed up to look good for him.

Despite her stalwartness, her husband was in a slow, unstoppable, downward spiral. The car crash from just a few days ago had left him with 16 broken ribs, 3 fractured limbs, and massive internal injuries. Not to mention, severe brain trauma. He tenuously clung to life, and she was still clinging to every bit of hope. But I knew, and deep down so did she, that in the end nothing was going to change the outcome. I sat silently next to her, feeling useless. Meanwhile, the slow churning of his artificial life support mechanisms filled the dead space. Distant sounds of nurses' footsteps drifted in from outside of the room's curtain.

I bet I've been in nearly 100 situations similar to this one, but sometimes it still hits me out of the blue. Quickly I noticed how sad I felt, and it seemed to come without warning. Lifting my gaze to meet hers, I could read all of her emotions as she silently transferred some of her burden to me. The moment of human connection in the room between me, her, and the patient we shared, was so strong it couldn't help but be expressed in silent, warm tears. I let mine drop, and she politely wiped hers away. That was the moment that she finally let herself realize what she already knew. It was sad but cathartic, and somehow we both felt better about it in the end.

Walking out of that patient's room, I realized that his wife and I had communicated, not through our words, but through our common feelings. We had made a connection. While his ultimate outcome was as we knew it would be, in those few minutes together there was still a small moment of victory as his wife was able to overcome an emotional barrier. She and I had shared a healing moment, and for those few minutes she was my patient, and I was her friend. Like my sick 5-year-old miracle, this woman had made a step forward, though in a different sense. Both of these moments shared a common language, though through different interchanges. It was the person inside of the doctor, and the feelings inside of the patient that made it work.

So for now I will continue to celebrate the small victories, and the large ones. I embrace the moments of tragedy. These occasions are at times marked by quiet and welling eyes, but others are met with animation and school-ground jargon. What makes them real is that they don't require an extensive vocabulary or an advanced degree. Both silence and simple expressions are part of our common vernacular. They connect us to each other, and that's stronger than educated words.