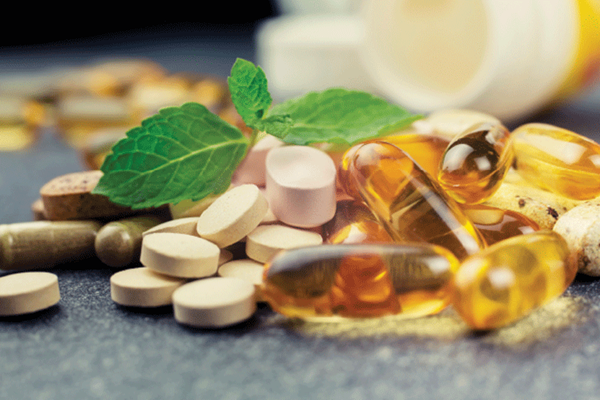 A 54-year-old male presents with a chief complaint of heat exhaustion. He is a truck driver who has been traveling across the country without air conditioning. Past medical history is not significant, and the only medication he takes is a weight loss supplement named DNP. Vital signs reveal a temperature of 101.3 °F, heart rate 105 bpm, and blood pressure of 128/65mmHg. The patient is alert and oriented but appears sleepy. He is diaphoretic, but exam is otherwise unremarkable. Cooled intravenous fluids and ice packs are placed. The patient's temperature continues to rise to as high as 104 °F despite the addition of mist and fans. His mental status begins to decline, and an arterial blood gas reveals a pH of 6.98 and pCO2 of 92 mmHg. He is intubated and admitted to the ICU. Two days later he is pronounced dead.

2,4-Dinitrophenol (DNP) was first used by the French army during WWI as an additive to explosives. Soldiers in the French munitions factories soon noticed that inhaling fumes and having contact exposure to DNP was causing weight loss, weakness, dizziness, and excessive sweating.1 In the 1930s, a team of researchers found that moderate doses of DNP could increase a person's metabolic rate by as much as 50% and was then promoted as an over-the-counter medication for public use.2 Just 5 years later, it was discovered to cause a wealth of adverse effects and was finally banned by the FDA in 1938.

Fast-forward to the 1980s, when a Russian physician began promoting a revolutionary new weight loss treatment called “Mitcal.” Complaints about its side effects began to accumulate, legal action followed, and in 1986 he was ordered to stop prescribing it. He continued to encourage its use and was eventually incarcerated. In 2008, he was arrested again for fraud as he was marketing a company in Europe that was developing DNP as a cancer treatment known as “intracellular hyperthermia therapy.” Since then, the internet has facilitated wide distribution, and it is now mostly used by bodybuilders and those interested in rapid weight loss.3

Normally, the only way the protons can re-enter is through ATP synthase. When a proton passes through ATP synthase, its energy is used to convert ADP to ATP. When DNP is present in a cell, it serves as a protonophore – it shuttles protons back into the inner membrane of the mitochondrion, bypassing ATP synthase. The energy is used to generate heat instead of ATP. There is no natural feedback cycle to counteract this heat production, which increases in proportion to the dosage of DNP. This cellular-level heat production can quickly result in fatal hyperthermia.4

DNP is a yellow crystalline powder with a sweet, musty odor. It is typically sold as either 100mg or 200mg tablets but can also be purchased in the powder form. Because of its federal ban, there is limited pharmacokinetic information. However, it is known to have a very narrow therapeutic index, with the lethal dose (LD50) reported as 36 mg/kg.5 Some studies have shown that within 3-4 days it is eliminated from the body.6 Some websites offer advice on dosing regimens. A typical regimen starts with one 200mg capsule for the first few days, followed by increasing doses to a recommended maximum of 400mg/day for up to 2 weeks.7 The highest reported dose taken in acute overdose associated with survival was 2.4 grams.8 Tolerance is established rapidly, but the acquired tolerance is lost if use is discontinued for 2 weeks.

DNP overdose presents similar to a sympathomimetic toxidrome. Patients may be hyperthermic, diaphoretic, or tachycardic. In more extreme cases, patients can present in PEA.

There is no antidote, and the key to management is early recognition and having a high index of suspicion. Any acute overdose should be observed for at least 12 hours, as no patient has been recorded to be asymptomatic beyond 10 hours of an acute overdose.9

Benzodiazepines may be used for seizures or for severely agitated patients. Dantrolene is of questionable benefit. While there is insufficient evidence to support its use, there is a single case report in which it was used successfully.10 If used, it should be administered as a 1mg/kg bolus and repeated until symptoms subside.

DNP is hardly alone on the list of banned diet supplements. Diet pills are not required by law to be tested by the FDA before being made available to the public. However, the FDA can remove a product it deems dangerous after it has hit the market.

Many diet pills have active ingredients that are similar to caffeine or even amphetamines. While most are relatively harmless, the list of side effects can include hepatic or renal toxicity, rectal bleeding, agitation, convulsions, hypertensive emergencies, and death.

In addition to DNP, the list of banned diet products includes:

—   Ephedra, an herbal supplement banned in 2004 because of its risk of hyperthermia and death.

—   Hydroxycut, banned in 2009 for its potential to cause hepatitis and jaundice.

—   Fenfluramine, one of the 2 active ingredients in Fen-Phen, which was recalled in the 1990s. It was chemically related to amphetamines, which, aside from abuse and dependence, was linked to pulmonary hypertension and death.11,12

It is of utmost importance to maintain a broad differential diagnosis in patients presenting with hyperthermia. Complete medical history may not be available, and ingestion or overdose should always be considered. Rapid lowering of body temperature and overall supportive care is, in general, the best course of action.