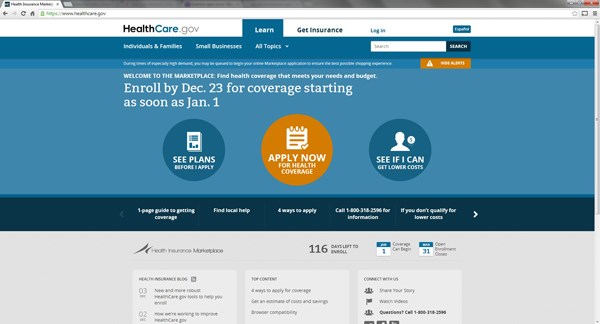 The Roll-Out of Health Insurance Exchanges: From Disaster to Success

On October 1, 2013 U.S. health insurance exchanges opened to enrollees. Individuals were eligible to use the exchanges if they were employees of small employers (defined as an employer with less than or equal to 100 employees), an individual, a part-time employee, or a pre-Medicare retiree (a person that retired before the age 65 when he/she would be eligible for Medicare). Applicants with incomes between 100% and 400% of the federal poverty level (FPL) were eligible for a tax credit.

While there was a lot of talk and preparation for the exchanges, the roll-out was essentially a disaster. During the first month of open enrollment, only 50,000 applicants enrolled in the exchanges due to the failure of the healthcare.gov website. This was only one-tenth of the expected number of enrollees for the month of October.By December 24, 2013 (the deadline for enrollment to ensure insurance coverage starting on January 1, 2014), 2.1 million Americans had signed up. By March 31, 2014 — the deadline to avoid the tax penalty on 2014 taxes — 8 million people had enrolled through the exchanges.The federal government's goal was an enrollment of 7.1 million. Miraculously, the exchanges exceeded this goal by 15%,2 and an additional 400,000 individuals completed their applications after the March 31 deadline.3 The Obama administration gave registrants an extension until April 15, 2014 if they had tried to apply prior to March 31, but were unable to complete the application. The late enrollees brought the total number to 8.5 million. However, there were another 5.5 million enrollees that started an application, but never finished it. Also of note, only approximately one-third of new enrollees did not have prior insurance coverage.4The success of the exchanges was dependent upon the enrollment of young, healthy patients to subsidize the older and less healthy patients. Young individuals aged 18-34 were the largest group of enrollees, representing 28% of the total enrollment. However, it was hoped that this age group would have made up 40% of all enrollees. Additionally, the majority of all applicants only enrolled in a silver plan, which has a lower premium and a higher deductible ($2,500-$5,000). There was some concern that the new enrollees would not pay their premiums; however, insurance companies are reporting an 80-90% payment rate.4For the 2014 enrollment period, 26 states and Washington, D.C. ran their own marketplaces, 17 states had federally-run exchanges, and seven states had a partnership exchange with the federal government.

The five states that enrolled the largest percent of their potential marketplace populations were Vermont, California, Rhode Island, Florida, and Idaho. All of these had state-based marketplaces, except for Florida, which had a federally-facilitated marketplace.4,5

The five states that enrolled the smallest percent of their potential marketplace population were Hawaii, North Dakota, Massachusetts, South Dakota and Iowa. Both Hawaii and Massachusetts had state-based exchanges, whereas the Dakotas had federally-run exchanges, and Iowa had a partnership exchange.5

Several state-run exchanges were plagued with technical difficulties, including those of Hawaii, Maryland, Massachusetts, and Oregon. Of these states, only Oregon will be using healthcare.gov next year. However, Oregon state officials will continue to regulate which plans are offered and other details of the exchange, so that it is still considered “state-run.”6 Nevada will also be using healthcare.gov, but will maintain control of its own exchange.7 Hawaii, Maryland, and Massachusetts are continuing to develop their own websites. Massachusetts is working on a dual track, attempting to rebuild its state exchange with a new vendor, while also working on a plan that involves ceding control of its marketplace to the federal government in case its state website is not ready.6

States had until May 1, 2014 to decide if they wanted to switch models. However, the federal government received no new requests. As previously planned, Idaho and New Mexico will be switching from a federal to a state-run exchange this year. These two states recognized their websites would not be ready for the 2014 enrollment period and opted to use healthcare.gov.8

For coverage starting in 2015, the proposed open enrollment period is November 15, 2014 through February 15, 2015. Many patients are still unaware they may qualify for a reduced premium insurance policy. Still others are weary of even trying to sign up on the exchanges due to the poor roll-out in the early months. As physicians, we should be knowledgeable about the issues and options available to patients, and provide education where it is needed. Increased coverage has the potential to improve both their health, and the health of our emergency departments.