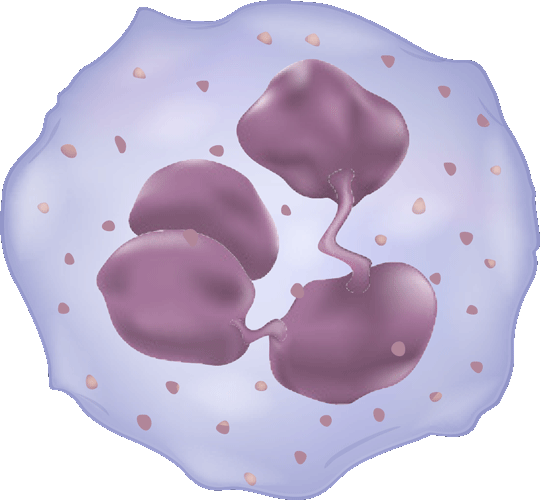 Case. A 25-year-old previously healthy male presents with a three-week history of flu-like symptoms, including myalgia, rhinorrhea, mild cough, and subjective fevers. He also complains of vision loss restrained to his right upper visual field for three to four days. He denies weakness, numbness, problems with balance, or shortness of breath. Routine labs are drawn, revealing a WBC count of 306,000/ µL with more than 90% blasts.

Hyperleukocytosis is arbitrarily defined as a WBC count greater than 100,000/ µL.1 Although there a few conditions that can present with elevated WBCs, hematologic malignancy tends to be the major cause of such an extremely elevated value. Hyperleukocytosis can be from a severe leukemoid reaction, which is when the WBC count is greater than 50,000/ µL in patients in whom leukemia has been ruled out. This can occur in infections (typically Clostridium difficile and disseminated tuberculosis), carcinomas, or severe hemorrhages.2 However, as mentioned, WBC counts higher than 100,000 is most prevalent in hematologic malignancies, mainly in acute myeloid leukemia (AML), chronic myeloid leukemia (CML), and acute lymphoblasic leukemia (ALL).3

In order to distinguish between leukemic and non-leukemic causes of hyperleukocytosis, a peripheral blood smear with a manual count should be done in addition to the necessary blood work and imaging. A significant presence of blasts makes a hematologic malignancy more likely. It is important to do a manual count because automated counters can erroneously count nucleated RBCs as leukocytes.4

When patients have hyperleukocytosis, they should be evaluated for any signs or symptoms of respiratory distress or neurological symptoms, including headaches, vision changes, confusion, or dizziness. Such clinical findings are indications of leukostasis, an emergent condition in which signs of tissue hypoxia are found. Less common findings can include EKG changes demonstrating a myocardial infarction or right heart strain, renal insufficiency, bowel infarction, and acute limb ischemia.1

Symptomatic hyperleukocytosis, or leukostasis, occurs when patients with hyperleukocytosis have end-organ damage, most commonly involving the brain or lungs. Leukostasis is a clinical diagnosis and does not correlate to any particular quantity of leukocytes. The increase in blood viscosity from the presence of excessive white blood cells impedes blood flow leading to tissue hypoxia. For this reason, blood transfusions and diuretics must be avoided, as they can further increase the viscosity.

Though any organ can be affected, common causes of early deaths in these cases are intracranial hemorrhage and respiratory failure. Although it is unclear why intracranial hemorrhage is one of the leading causes of mortality, it is theorized that the increased number of blasts create friction and provoke endothelial damage, subsequently causing hemorrhage.5 Leukostasis is more common in AML than ALL, and rarely seen in chronic leukemia.3

The definitive method of management of acute leukemia is induction chemotherapy, which requires prompt referral to a center capable of emergently treating blood cancers. Nevertheless, important management decisions can be made by the emergency physician prior to the admission or transfer of these leukemic patients. In cases of hyperleukocytosis, primary workup should include checking a complete blood count, complete metabolic panel, coagulation studies, a chest X-ray, an EKG, and a urine analysis to evaluate for any end-organ damage from tissue hypoxia.

Two major diseases that should be considered in any patient with hyperleukocytosis are tumor lysis syndrome (TLS) and disseminated intravascular coagulation (DIC). TLS can occur in any hematologic malignancy, even prior to treatment (though less commonly so) if cell turnover is high enough. DIC can occur with acute promyelocytic leukemia and can lead to bleeding and thrombotic complications.6 Thus, it is important to check the uric acid, LDH, and phosphorus levels for TLS, along with fibrinogen levels and fibrin split products for DIC.

Tumor lysis syndrome is a phenomenon that occurs due to the destruction of malignant cells. As these cells are lysed, the cellular contents, including potassium, phosphorus, and nucleic acids, are released into the systemic circulation. Purines, a nucleic acid breakdown product, are metabolized into uric acid, which is detectable in serum. As the levels of these metabolites continue to increase, they cause various toxic effects, including heart failure, acute kidney injury, muscle cramps, tetany, and seizures. Due to the severe consequences of this phenomenon, early detection and monitoring is critical. Allopurinol in combination with intravenous fluids should be given immediately in patients with hyperleukocytosis due to a suspected leukemia as prophylaxis for TLS.7 Rasburicase can be given if the uric acid level is increased.8

Once the initial clinical assessment is completed and prophylactic medications are administered, there are some preemptive measures that can be done acutely to prevent further complications. Prior to initiating chemotherapy, the WBC is typically lowered in order to decrease the potential for tumor lysis syndrome. Aggressive hydration is initiated primarily. It is recommended that maintenance fluids, preferably without potassium or calcium, be started at two to four times the normal rate depending on the severity of the WBC count.4

The patient in this case had leukostasis resulting in visual changes. He received both hydroxyurea and two rounds of leukapheresis while he was awaiting formal diagnosis of his disease from a bone marrow biopsy. These therapies lowered his WBC count to 58,000/ µL within the first 24 hours and his visual symptoms resolved. His initial uric acid level was 8.0 mg/dL and his LDH was 3,506 units/L. He was given a dose of rasburicase due to early tumor lysis syndrome and was started on allopurinol. He was subsequently diagnosed with AML and received induction chemotherapy. This patient's presentation was relatively mild given his severe hyperleukocytosis. It is critically important in patients with hyperleukocytosis to do a thorough evaluation and to consider all of the potential sequelae that can occur.