A 29-year-old carpenter rushes into your emergency department with a 6 cm laceration on the palmar aspect of his hand after mishandling a power saw. The laceration extends from the interphalangeal joint of his thumb to the base of his little finger. You know that this injury will require a significant amount of time to repair; how are you going to address his pain?

Upper extremity injuries are commonly seen in the emergency department and can be challenging to properly anesthetize. There are various methods used by emergency physicians use to provide pain relief for upper extremity injuries including local infiltration, hematoma blocks, systemic (oral or intravenous) pain medications, and procedural sedation. The traditional landmark-based forearm nerve blocks are also frequently employed, however as ultrasound is becoming a ubiquitous tool in the emergency department, so are ultrasound-guided nerve blocks.

Depending on which nerve is targeted (median, ulnar, or radial), a forearm nerve block can efficiently provide anesthesia to the entire hand while minimizing the amount of medication administered. Though each nerve can be anesthetized at any point along its path, we will focus on the optimal positioning for forearm nerve blocks to maximize effect.

The median nerve is best identified at the carpel tunnel with the patient's arm supinated with a relaxed wrist. Using a high frequency linear probe, visualize the round, hyperechoic honey-combed appearing median nerve in transverse plane at the volar aspect of the wrist starting at the first carpal crease (Images 1 and 2).1,2

The ulnar nerve forms from the medial cord of the brachial plexus and provides sensation for the dorsal and palmar side of the ulnar aspect of the hand. It travels between the ulnar artery and the flexor carpi ulnaris tendon down the forearm.3 The ulnar nerve is best identified at the medial, or ulnar aspect of the artery. Following the nerve proximally until the nerve separates itself from the accompanying artery will provide the optimal location for anesthetic administration (Images 3 and 4).2

The radial nerve forms from a branch of the posterior cord of the brachial plexus and splits into its superficial and deep branches in the antecubital fossa. The superficial branch provides sensation to the radial dorsal aspect of the hand. It is best identified with the assistance of its arterial counterpart. Using the radial artery as a landmark, the radial nerve can be found coursing down the forearm parallel and laterally, or radially, to the artery.4 It is best to perform the nerve block at the level of the middle third of the forearm, allowing adequate separation between the artery and the nerve (Images 5 and 6).2 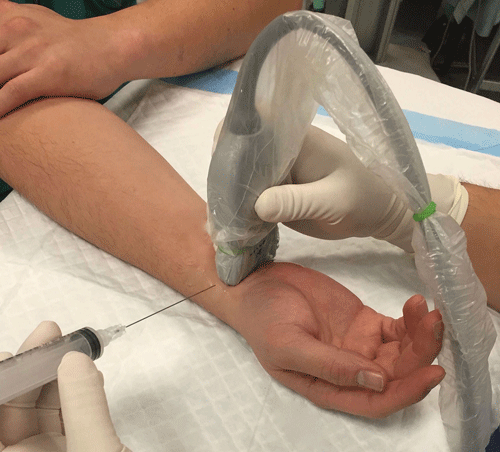 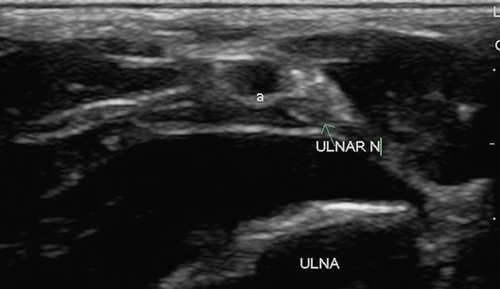 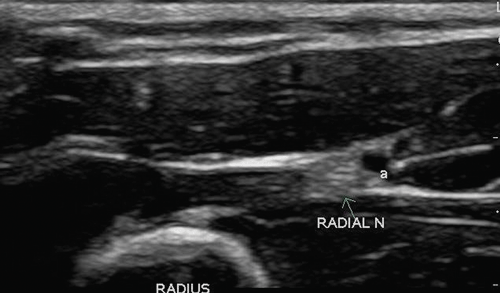 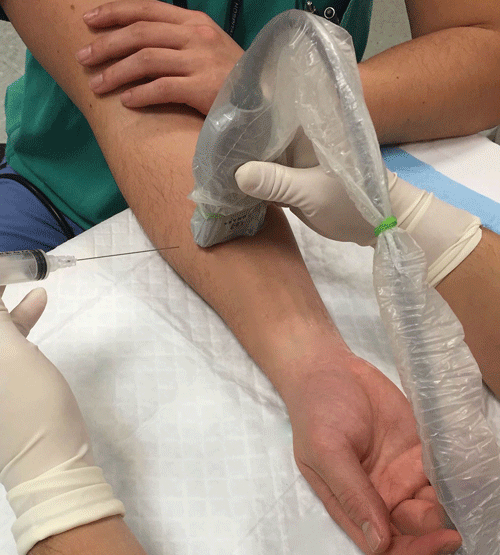 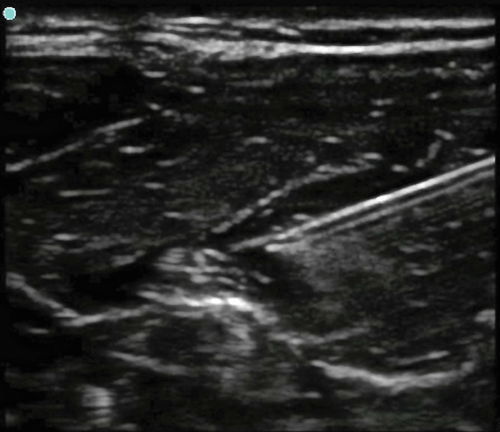 For optimal positioning, the patient's arm should be supinated, resting on a hard flat surface. Using ultrasound, identify the location along the forearm where the nerve is best visualized. Using sterile technique, confirm the site of injection and make a superficial skin wheel. With the probe held in a transverse position, one should enter just lateral to either side of the probe for a median nerve block. For the radial and ulnar nerves, the needle should enter from the side opposite the corresponding artery, thus decreasing the likelihood of vascular puncture. The needle should be visualized during the entirety of the procedure using the in-plane technique (Image 7). Be careful to avoid puncturing the actual nerve during the procedure. Once the needle is positioned adjacent to the nerve structure, draw back on the syringe to confirm that that a vascular structure has not been entered, and then introduce 1cc of local anesthetic. Anechoic fluid should be seen surrounding and enveloping the nerve. Each nerve should require approximately 3-4 cc in order to provide adequate anesthesia.

Studies advocating the use of nerve blocks have been positively received in the emergency medicine community because of their relative efficacy and safety compared to the alternatives, namely procedural sedation.5 In 2007, Stone et. al published five case studies showing the feasibility of performing supraclavicular brachial plexus nerve blocks in the emergency department and the potential to avoid procedural sedation when treating upper extremity injuries.5

In a 2006 study published in Annals of Emergency Medicine, four emergency physicians at different experience levels performed twenty-two ultrasound-guided blocks of the hand on eleven patients with various hand injuries. After a one-hour training session and five supervised procedures on a nerve model, the four physicians were able to adequately perform these nerve blocks. Though this study was performed with no control and had a small sample size, all enrolled patients achieved adequate pain control with no need for additional analgesia. Moreover, the median time required to anesthetize each patient, who on average required at least two of the three blocks, was only nine minutes.6

Nerve blocks performed with the landmark technique have been utilized in the emergency department successfully for years. However, considering that the procedure is not without its own set of risks, why not enhance the efficacy of this procedure by using ultrasound? Ultrasound-guided nerve blocks have been shown to increase the rate of success from 85% to 95%.7 Additionally, analgesia can be achieved without local infiltration which distorts the wound, thereby enabling easier skin closure and a more aesthetically pleasing result.