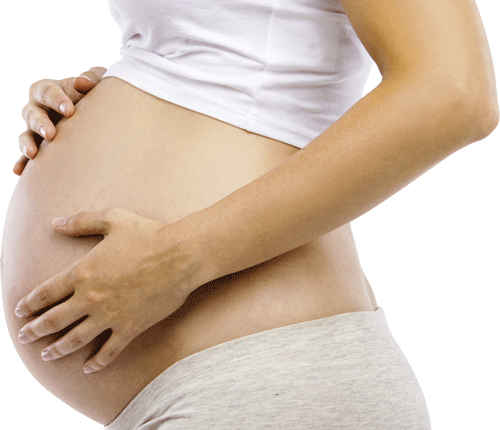 A 32-year-old pregnant woman at 30 weeks gestation is brought to the emergency department. Earlier in the day she had a sudden onset of shortness of breath, followed by an episode of syncope. She denies cough, fever, palpitations, sweating, or leg swelling/pain, but did recently travel to Europe, and is a smoker.

Her heart rate is 106 beats/min, her blood pressure 98/64 mm Hg, and her respiratory rate 22 breaths/min with an O2 sat of 86% on room air. She has distended neck veins and a new right bundle branch block. With high concern for pulmonary embolism (PE), intravenous unfractionated heparin is started immediately. Shortly thereafter, the patient's blood pressure begins to drop and she becomes increasingly obtunded. Rt-PA is considered, but ultimately it is not given because its adverse effects in pregnancy are not well understood. The patient continues to deteriorate, and unfortunately passes away despite resuscitative efforts.

The hypercoaguable state that is inherent during pregnancy increases the risk of pulmonary embolism (PE), which is responsible for 11-20% of maternal deaths.1,2 PE is considered the most common cause of direct maternal mortality, but it's true incidence during pregnancy is unclear; in many suspected cases, the path to a definitive diagnosis is clouded by fears about exposing the fetus to radiation and the dearth of treatment options. The presence or absence of specific clinical symptoms should not be relied upon to diagnose or exclude PE. About 40% of asymptomatic pregnant patients with deep vein thrombosis (DVT) might actually have PE.3 The incidence is spread throughout the nine months of pregnancy, but more than half of cases occur during the first five months. Systemic thrombolytic drugs are approved for use in response to ischemic stroke, myocardial infarction, PE, and thrombosis of cardiac valve prosthesis, but no randomized controlled trials have examined their use in pregnant patients.

Massive PE is one of the most life-threatening emergencies that can arise during pregnancy. In its more extreme form, an acute episode can be accompanied by persistent hypotension (systolic blood pressure <90 mm Hg), requiring inotropic support. Other findings in severe PE may include pulselessness or persistent profound bradycardia.4 However, other causes of the patient being in extremis should be ruled out, including arrhythmia, hypovolemia, sepsis, or left ventricular dysfunction. Intravenous unfractionated heparin (UFH) is the conventional ideal treatment in PE. However, in massive PE with hemodynamic instability, where there is virtually complete obstruction of the pulmonary blood flow, UFH cannot reduce the blockage, and therefore cannot restore pulmonary circulation.

Thrombolytics are extremely valuable in such situations, and an infusion of UFH can then follow. The lung receives the entire cardiac output and all of the administered thrombolytic agent, no matter which vein is used to administer the drug. As a result, PE is exceptionally sensitive to thrombolysis, even at lower-than-standard doses, which adds to its safety profile.

During pregnancy, the hazards of thrombolysis lie in the risks of fetal and maternal bleeding, fetomaternal death, teratogenicity, and placental abruption. Several literature reviews have found no documentation of placental abruption associated with thrombolytic therapy. The maternal hemorrhage complication rate has been reported at approximately 6%, equivalent to the rate among non-pregnant patients receiving thrombolytic therapy.5-8

Thrombolytics have been used only rarely during pregnancy. Leonhardt and associates found only 28 reports of the use of rt-PA in pregnant women at the time of their literature review, published in 2006. Their collected data showed that thrombolytics had been used during all three trimesters for various indications: cerebrovascular accident (10); PE (7); cardiac valve thrombus (3); DVT (3); and MI (1). Two patients died (7%), as did 6 of the fetuses of the 26 surviving mothers (23%).

Five of the fetuses of the seven women who received thrombolytic therapy for severe PE were delivered as healthy newborns at term. The other two died of causes other than thrombolysis: one as a spontaneous abortion stemming from the mother's hemodynamic instability, and the other as a result of neonatal respiratory distress syndrome at two weeks postpartum.7-14

A meta-analysis of randomized controlled trials (RCT) of thrombolysis in massive and submassive PE published prior to 2004 reported a risk of major bleeding of 9.1% and intracranial haemorrhage (ICH) of 0.5% while a recent large RCT of tenecteplase in submassive PE (PEITHO) observed rates of major bleeding of 6.3% and ICH of 2% (compared with 1.5% and 0.2% respectively for heparin alone).16 Another recent review identified 189 pregnant patients receiving thrombolysis for venous thromboembolism. Major bleeding occurred in 2.6%, with no maternal mortality.17

Current guidelines recommend the use of rt-PA because it is fibrin-specific and non-antigenic, and has a short half-life. Thus, it is preferred over streptokinase and urokinase, which are used infrequently in most developed countries. Although the administration of systemic thrombolytics is considered a high-risk approach in pregnant women, several reports have described their lifesaving and efficacious use in the management of massive PE and hemodynamic instability.

Since massive PE is a life-threatening condition and management options are limited during pregnancy, thrombolysis is considered a valuable choice. It has a prompt effect, it is readily available in nearly every hospital, it has no reported teratogenic or fetomaternal toxicity, and it minimizes the risk of post-thrombolytic pulmonary hypertension.21 Recent data from a large unselected national registry demonstrated that thrombolysis in normotensive patients with acute PE was associated with increased mortality,22 therefore the use of thrombolytics (particularly rt-PA) should be reserved for pregnant women who have life-threatening PE with hemodynamic instability. Pregnancy should not necessarily be cited as a reason for withholding thrombolytics, especially when alternatives are lacking, despite the fact that ACC/AHA lists pregnancy as a “relative” contraindication in their STEMI 2014 guidelines.23 Further studies and analyses are warranted to elucidate the safety of thrombolytic administration during pregnancy.