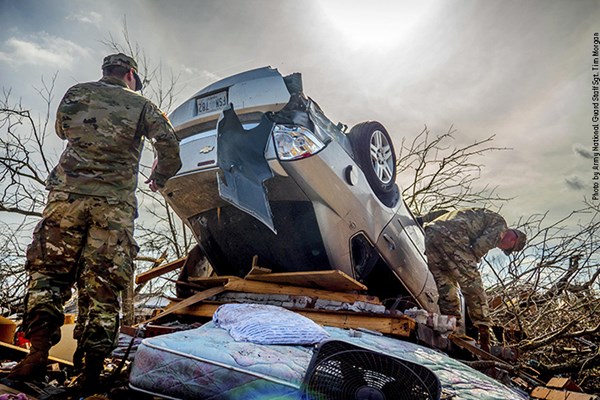 In the early morning hours of Jan. 21, 2017, medical students in Mississippi were”¦ studying. Like every other first-year student, I was cramming for one of our last anatomy exams scheduled for the following Monday. I planned on going to the anatomy lab that night with my study partner, but we decided to meet up Saturday instead.

However, those plans never came to fruition.

At 3:45 am, a powerful EF3 tornado barreled through the campus of William Carey University in Hattiesburg, Mississippi. The anatomy wing of the College of Osteopathic Medicine was in the direct path of the twister and was demolished. Three of my classmates were still studying in the lab when the tornado hit. Luckily, they took shelter in a nearby bathroom and their lives were spared. Their vehicles were not.

Several students suffered heavy losses, from vehicles to complete homes. One second-year student hid for his life underneath his bed in a second-floor apartment, as his building was blown to shreds around him.

In a matter of minutes, our medical school was destroyed. Everything that once seemed so steadfast was shattered in a million pieces. Do we have our exam Monday? Do we even have school anymore? How can we recover? Millions of unknowns and few answers left our entire student body in shock.

I will never forget the hours preceding the tornado. I called it quits from studying at 2 am and went to bed. An hour later, my husband and I were awoken by my cellphone's emergency weather alert – TORNADO WARNING. We took cover in our bedroom closet, with our dogs, for 2 hours until we were certain the storm had passed. We lost electricity, we lost cell service, and we were not sure what exactly was happening around us. We knew it was bad. Our hair stood on end as we could hear the rumble of the tornado ripping apart Hattiesburg and taking lives with it.

Unable to go back to sleep, as soon as the sun rose, my husband and I drove to campus. Our neighborhood only showed minor flooding and wind damage – so we hoped the twister wasn't as bad as it sounded. But as we got closer to school, the destruction got worse. It looked like a war zone. If trees weren't severed in half, they were wrapped in metal from a nearby building. Home after home leading into campus was damaged beyond repair.

Having grown up in tornado alley in Missouri and Texas, I have seen tornado damage – but never this bad, never this extensive. William Carey suffered $73 million in damages. No medical students were physically harmed, but 4 people in Forrest County lost their lives that night, and 20 were severely injured.

Our administration was quick to act. The tornado could take our school, but it was not going to stop our education. Through the tireless work of Dean James Turner, and the generous outreach from the University of Southern Mississippi (USM), we were back in the classroom on Jan. 30 at USM. A rocky semester followed, but everyone was simply grateful to still be in school, and ultimately, still be alive.

The tornado was a reminder to take nothing for granted. It showed us that when everything seems broken into a million pieces, determination and perseverance can help us overcome the insurmountable. I know every one of my classmates came out of this natural disaster (and the uprooted semester that followed) with more resiliency and mental fortitude than they ever thought possible – traits that will someday soon help us be better physicians.

And none of us will ever again wish our exam not happen on Monday.

We returned “home” to our newly reconstructed campus at Carey for the start of classes on July 24, 2017.