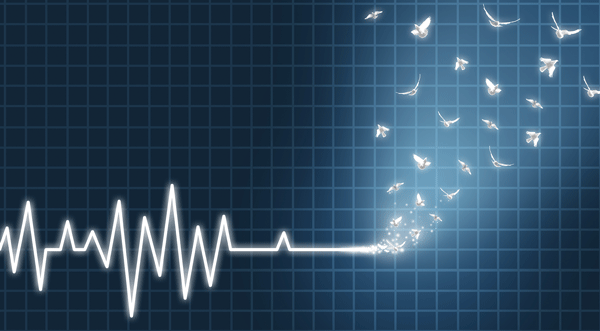 Paramedics are on scene with a 65-year-old male who had a witnessed cardiac arrest (CA). CPR was not started until EMS arrived, and they have been working the resuscitation for 25 minutes. The patient's initial rhythm was ventricular fibrillation (VF), but after 4 defibrillations he is currently in pulseless electrical activity (PEA). He has received a total of 5mg epinephrine and 300mg amiodarone. A supraglottic airway is in place and the current end tidal CO2 (ETCO2) is 28. The crew calls you and wants to know if they should continue working on scene, transport to the hospital, or terminate resuscitative efforts.

Survival rates from out-of-hospital cardiac arrest (OHCA) vary significantly throughout the United States, but the overall rate remains low at 8.3%.1 Historically, all OHCA patients were transported “lights and sirens” to the emergency department (ED). Efforts to increase survival from OHCA now focus on high-quality on-scene resuscitation, with the recognition that patients not successfully resuscitated in the field have a very low likelihood of survival. As such, termination of resuscitation (TOR) in the field for certain patients who do not respond to resuscitative efforts has become a key component of OHCA management.

Determining which patients qualify for TOR has been the subject of much research and has resulted in the derivation and validation of 2 decision rules endorsed by the American Heart Association, the National Association of EMS Physicians, and the International Liaison Committee on Resuscitation. These rules were validated across both ALS systems with multiple providers performing resuscitation, as well as BLS systems with only 2 responding providers.

First, for EMS systems with only BLS, the termination of resuscitation rule uses 3 criteria:

A validation study using these criteria found it to have a 99.5% predictive of death.2 If all criteria are met, the resuscitation can be terminated.

Second, for EMS systems with BLS and/or ALS, the termination of resuscitation rule uses 4 criteria:


If all these criteria are met, it is 99.8% predictive of death, and the resuscitation can be terminated (Figure 1).3

The Role of Online Medical Control

Despite the existence of these decision rules, there is still variability in online medical control (OLMC) physician willingness to terminate OHCA.4-5 This variability is multifactorial and includes a lack of OLMC training, difficulty communicating with EMS providers, and legally unfounded concerns over subsequent litigation.6 Additionally, sometimes EMS system issues impede the implementation of field TOR. For example, while it is recognized that TOR for OHCA patients with an extremely low chance of survival helps to avoid wasteful resource utilization in the ED, non-transport of these patients can put a financial burden on the EMS provider agency that can only bill for their services if the patient is transported to the hospital.

Another reason that TOR is difficult for OLMC physicians is that gray areas do exist. For example, AHA guidelines recommend utilizing ETCO2 to confirm intubation, monitor resuscitation efforts, and identify ROSC. However, they are less clear on its utilization in TOR. While prior studies have suggested that ETCO2 does appear to correlate with patient outcome, contradictory data exists and cannot be interpreted in isolation.7-9 It must therefore be interpreted within the context of the resuscitation. Should a patient who meets all TOR criteria, but has a persistently high ETCO2, be terminated in the field? Conversely, should a patient who received a single defibrillation but is now in asystole with a low ETCO2 be transported to the ED?

Since the practical incorporation of a TOR by OLMC physicians can be difficult, we have created a 5-step thought process to allow even a new OLMC physician to rapidly obtain all needed information and provide concise recommendations.

Three options exist: continued on-scene resuscitation, field TOR, or transport to the hospital with ongoing resuscitation. The decision to continue on-scene resuscitation should be based on tangible resuscitation tasks that should be performed before the decision to transport or terminate is made. For example, performing two more defibrillations for a patient in a shockable rhythm, administering bicarbonate and calcium for a patient with suspected hyperkalemia, or ensuring asystole is not fine ventricular fibrillation. Once assigned tasks are performed, field providers can update the OLMC physician, and the decision of TOR or transport can be made. 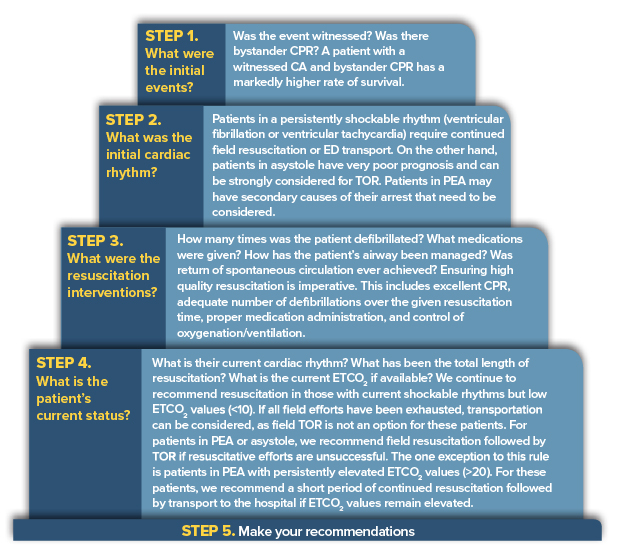 TOR is a vital part of OHCA management that can be used to provide appropriate, safe, and high-quality care to patients while avoiding futile transportation of patients with low likelihood of survival. Knowledge of local EMS protocols and system resources is of the utmost importance when providing OLMC for patients in CA. If advanced medical care is not an option for an EMS system, we recommend focusing on high-quality BLS with adherence to internationally recognized BLS TOR rules. Furthermore, being able to balance those protocols with validated decision rules and the above five-step decision process can allow even the most novice physician to make the most informed decision during OLMC management of OHCA.