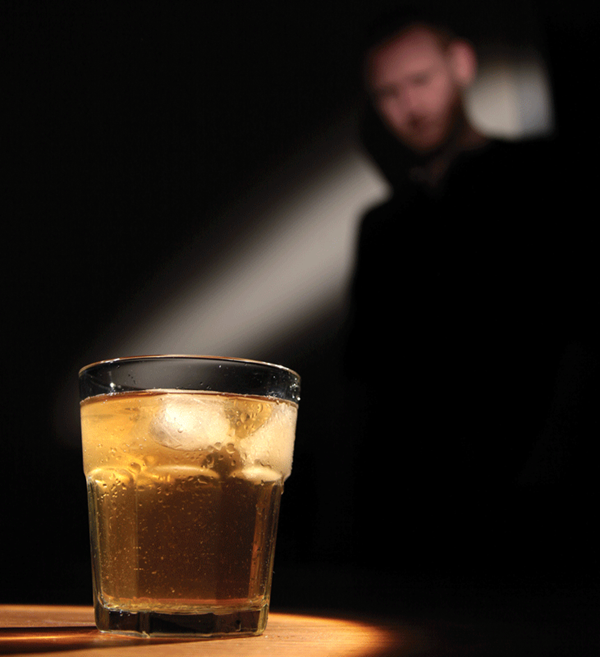 A 49-year-old male with a history of alcohol abuse presents to the ED with complaints of generalized abdominal pain and vomiting for the last 36 hours. The patient is well-known to the department for alcohol-related visits and continues to drink daily. On arrival, he is tachycardic and tachypneic, and physical examination findings include dry mucous membranes, decreased sakin turgor, epigastric tenderness, and a tremor in both hands. Laboratory studies show a serum bicarbonate of 10 mEq/L, an anion gap of 30, a serum glucose of 95 mg/dL, a lactic acidosis with pH 7.2, hypophosphatemia, and trace ketonuria. Abdominal CT scan is normal. He denies a history of diabetes mellitus, ingestion of any toxic alcohols, or recent illness.

This patient could potentially have any one of many diagnoses, but his presentation and lab findings are most consistent with alcoholic ketoacidosis (AKA). AKA can be a common ED diagnosis and typically occurs in chronic alcohol drinkers who have an abrupt cessation in their alcohol intake coupled with decreased glycemic intake and intravascular volume depletion.1

In the majority of cases, a precipitating event such as pancreatitis, gastritis, or an aspiration pneumonia leads to an abrupt decline in oral intake. About 24 to 72 hours after cessation of PO intake, AKA can develop.2 These patients usually have a low or absent serum alcohol concentration and can present with varying degrees of alcohol withdrawal. However, a clear sensorium is a hallmark of this condition. The presence of an alteration in consciousness strongly suggests that another process is present.3

Although the underlying pathophysiology is complex, a proper comprehension greatly aids in the diagnosis and management of this condition.

There are three general concepts that drive AKA:

Other life-threatening conditions that can cause a significant anion gap acidosis should also be considered in the differential diagnosis. The toxic alcohols, specifically methanol and ethylene glycol, may be intentionally or accidentally ingested in this patient population. These ingestions can cause significant morbidity and mortality if not appropriately managed.5 Altered mental status is a common feature of toxic alcohol ingestion but is not usually seen in AKA.5

Patients will typically have an initial osmolar gap that transitions to an increased anion gap as the toxic alcohol is metabolized. Elevated serum BHB concentration may be quite elevated in AKA, but this does not necessarily exclude the possibility of toxic alcohol ingestion; nor does the absence of an osmolar or anion gap rule out the diagnosis. While patients in AKA have a slight lactic acidosis, the presence of a significantly elevated lactate level should prompt the search for an underlying illness. Rarely, a combination of AKA and one of these other events may occur and present a diagnostic conundrum. Thoughtful consideration of timing, type and amount of ingestion, and associated symptoms, in combination with observation and laboratory studies, must be used to make this differentiation if a clear and accurate history is lacking.

The reversal of ketosis and vigorous rehydration are central in the management of AKA. In addition to isotonic fluid replacement, dextrose-containing intravenous fluids are needed. Typically, 5% dextrose with half-normal saline at a rate of 150 mL per hour provides sufficient glucose to stimulate the pancreas to secrete insulin, allowing peripheral tissues to metabolize ketones and inhibit FFA release.2 It also allows the body to regenerate NAD+, which is inhibited by the metabolic alterations caused by AKA. Intravenous dextrose-containing fluid infusions should be stopped once the bicarbonate levels have reached 18-20 mEq/L and the patient is tolerating oral intake. This typically occurs 8 to 16 hours after the initiation of treatment.2 Alcohol withdrawal in these patients should be aggressively managed with intravenous benzodiazepines. Thiamine, folate, and other electrolytes, most notably phosphate and potassium, may need to be repleted in these patients.6 Interestingly, the majority of morbidity seen in AKA is due to the underlying process that caused the cessation of alcohol.

The patient received 4 liters of normal saline and was started on D5-1/2 NS prior to admission. He was given IV valium for alcohol withdrawal, and thiamine, folate, and phosphate were repleted. He was hospitalized for three days for management of AKA and alcohol withdrawal, then discharged once tolerating oral intake and in good condition. He was seen three weeks later in the emergency department for a similar presentation. 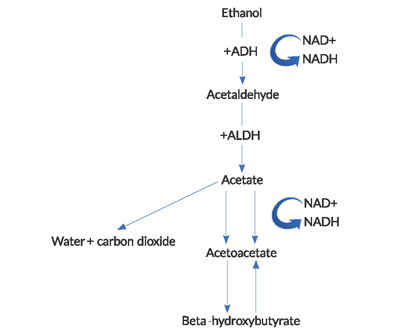