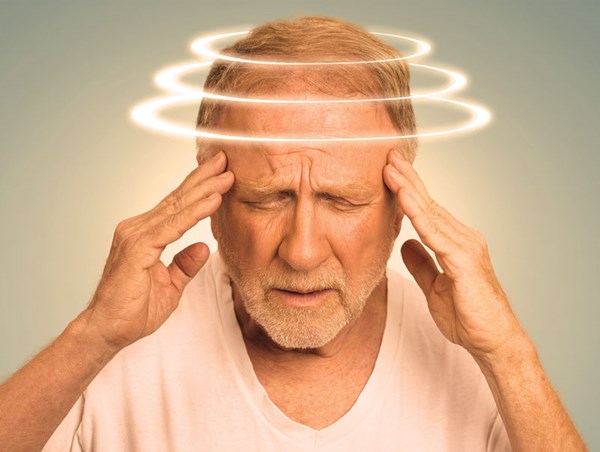 When The Room Is Spinning: Can't-Miss Diagnoses in the Dizzy Patient

A 34-year-old previously healthy female presents with abrupt onset right-sided headache, vertigo, and vomiting associated with diplopia and perioral paresthesias. On exam, the patient is afebrile with normal vital signs. Her neurologic exam is remarkable for a unilateral lateral gaze palsy, multidirectional nystagmus, and unsteadiness of gait. She exhibits persistent retching despite antiemetics.

What is on your differential? What labs or imaging studies would you pursue at this point?

Ischemic and hemorrhagic cerebellar infarcts accounts for just 2% of CVAs overall.2 The classic triad of presenting symptoms is headache, vomiting and ataxia.3 Patients typically appear toxic, manifesting dysmetria and ataxia (eg, 71% are unable to walk without assistance).4 A key exam finding is direction-changing nystagmus, in which the direction of saccadic beats follow the direction of gaze. While neurologic deficits that correlate with cerebellar injury are commonly evident, manifestations can be highly variable — making this a remarkably challenging diagnosis. For example, a subset of approximately 10% of patients will present with isolated subjective vertigo without deficits.5 However, among this subset without neurologic deficits, 84% will have either ataxia or direction changing nystagmus. While CT can reliably detect cerebellar hemorrhage,
it has poor sensitivity (26%) for ischemic lesions. Therefore, MRI is the optimal study.5

Vertebral artery dissection (VAD) is a rare disease entity that typically afflicts relatively young patients. Presenting symptoms are usually acute onset neck pain or headache, followed by progressive development of neurologic symptoms.6 Headaches are typically posterior, ipsilateral, throbbing, and accompanied by diplopia and vomiting. Neurologic deficits often involve ataxia and even hemiparesis. It should be noted that vertebral artery dissection afflicts the posterior circulation and manifests as cerebellar dysfunction—in distinction from carotid dissection, where the presenting headache is associated with contralateral cerebral hemispheric deficits and may be accompanied by Horner's syndrome in up to half of cases. CTA has been shown to be equivalent to MRA and is the initial study of choice to evaluate for VAD in the ED after a hemorrhagic etiology has been ruled out with non-contrast head CT.7 Common neuroimaging findings suggestive of VAD are the “string of pearls” sign, arterial dilation, pseudoaneurysm, double lumen or intimal flap formation (Figure 1).

Also known as Wallenberg syndrome, lateral medullary syndrome is a classic constellation of symptoms associated with a medullary infarct involving the posterior inferior cerebellar artery (PICA). Several bordering brainstem nuclei and tracts can be damaged, causing the triad of Horner syndrome, ipsilateral ataxia, and contralateral hypoalgesia. Lateral medullary syndrome is the most common syndrome associated with intracranial vertebral artery occlusion and can be seen in up to 20% of cases of VAD.8,9 Symptoms often include imbalance, vertigo, diplopia, nystagmus, dysphagia, hoarseness, and Horner syndrome. While manifesting symptoms can be variable given degree of infarct, crossed hemisensory deficits are seen in 90% cases.10 An ischemic process within the thrombolysis window warrants immediate evaluation for potential administration of thrombolytics. Emergent labs and neuroimaging should be obtained STAT. While MRI is the gold standard for brainstem strokes, the sensitivity within 48 hours of symptom onset is 72%, further emphasizing importance of clinical suspicion.11

The approach to headache and vertigo should incite prompt evaluation of ABCs, fingerstick glucose, and history and physical, in addition to a thorough neurologic exam with a focus on coordination and ataxia. Any suspicion of stroke should prompt immediate neuroimaging. The HINTS exam may be especially useful in identifying 3 particularly worrisome findings—multidirectional nystagmus, vertical skew, and a normal head impulse test.11 Obtaining a clear history of symptom onset is critical, as thrombolysis may be indicated. Initial imaging of choice is CT/CTA head and neck to evaluate for hemorrhage, dissection and large vessel filling defects. The definitive imaging modality to evaluate brainstem and posterior fossa stroke is MRI/MRA, but this is often not available rapidly enough to influence the decision on thrombolytics. In cases of non-hemorrhagic, ischemic posterior CVAs in which thrombolysis is not indicated, early antiplatelet should be initiated in the ED.

Finally, a broader differential of stroke mimics may prompt lumbar puncture to evaluate for basilar meningitis or multiple sclerosis. The approach to a patient presenting with headache and vertigo must be steeped in a “worst-first” differential diagnosis that evaluates for highly morbid catastrophic cerebellar and brainstem strokes. Prompt evaluation, diagnostic testing, and imaging are crucial to facilitate involvement of consultants and timely, life- and brain-saving interventions.

A CTA of the head and neck did not identify any mass, cerebellar hemorrhage, arteriovenous malformation (AVM), or vascular dissection. Lumbar puncture was also normal, including a normal cell count, gram stain, glucose, and absence of oligoclonal bands. An MRI showed no acute intracranial pathology. The patient was admitted to neurology with the presumptive diagnosis of ophthalmoplegic migraine and was treated with dopamine antagonists and NSAIDs. During her 2-day admission, her headache and vertigo resolved. She had regained the majority of the adduction of her eye, and the amplitude of her nystagmus had diminished. Verapamil was initiated as prophylactic migraine treatment and she was discharged with follow-up in neurology clinic.

Acute vestibular syndrome, defined as rapid onset dizziness accompanied by nystagmus, nausea, vomiting, and gait unsteadiness, envelops both benign peripheral and highly morbid central pathologies. However, discerning between these etiologies is particularly challenging when relying on subjective sensory abnormalities amidst a confusing array of descriptions (ie, dizziness, presyncope, vertigo, unsteadiness) that are highly subjective and historian-dependent.14 Further, patients' descriptions of vertigo have been shown to be inconsistent and unreliable.15 The emergency physician must pay close attention to details regarding associated symptoms and always perform a thorough neurological examination.