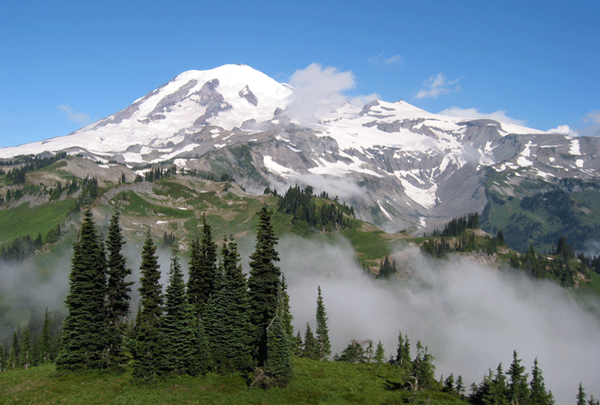 “On your mark, get set, go!” My five teammates and I charge up the snow-blanketed hill, venturing into the dense timber of the state park. Armed with our essential survival gear and a topographical map denoting six places where our medical knowledge and improvisational ability would be tried, we navigate to our first destination. On arrival, an emergency medicine physician and medical student present the scenario to our team:

“Your team is hiking along the bluffs of the Iowa River. Your friend peeks over the bluff and slips, falling 12 feet.” We look over the edge of the trail and see a mannequin dressed in winter clothes lying in the snow under a thorny bush”¦.

Team members construct a flutter valve for a mannequin with a tension pneumothorax.

Like other organizations around the country, the Wilderness Medicine Interest Group at the University of Iowa Carver College of Medicine holds an annual race. The medical scenario-based race is designed for first- and second-year students. Scenarios are written by senior medical students in the interest group with the oversight of EM residents and physicians. The race is held at a state park in January or February when snow, ice, wind, and temperatures below 0 ° F add elements of adversity to the already challenging medical scenarios. Over the past four years, more than 120 junior students have raced and more than 30 senior students have designed scenarios (Table 1). The race aims to integrate the application of pre-clinical knowledge, clinical information, teamwork, improvisation, and triage while introducing students to wilderness medicine (WM).

In recent years, WM races have seen a rapid rise in popularity. The races challenge participants to navigate a course and respond to medical emergencies with only the equipment they are carrying. Races may be locally organized (e.g., by a medical school or emergency medicine department) or managed by a race organization. Usually, races are designed to simulate medical decision making outside of a traditional hospital setting, to force participants to improvise basic medical equipment, and to solve normally routine problems in an austere environment.1 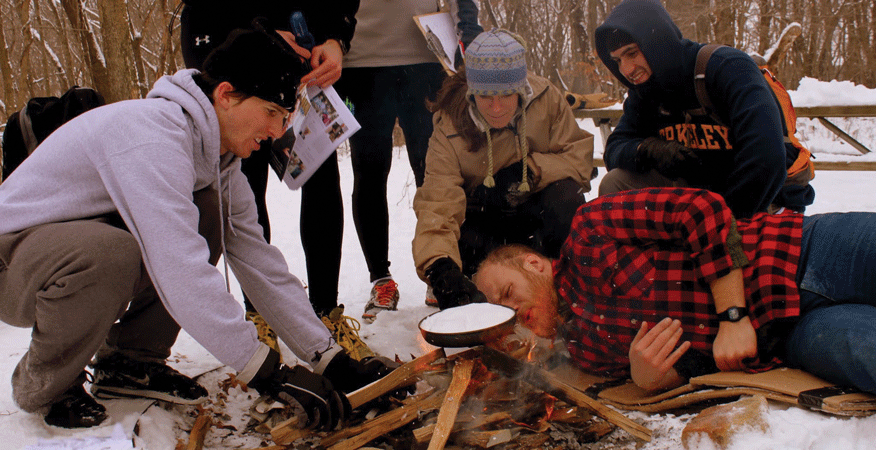 A team struggles to start a fire to melt snow during a frostbite scenario.

The largest WM race series is held by the organizers of the Medical Wilderness Adventure Race (MedWAR; www.medwar.org). MedWAR was started in 2000 by two EM physicians, Dr. Michael Caudell and Dr. David Ledrick, at the Medical College of Georgia. Since 2001, these events have spread across the U.S. and Canada, hosted by medical schools, the National Outdoor Leadership School (NOLS), and EM departments.2 There are several events scheduled for 2015, with several expansions planned for next year. Typically, MedWAR participants (the majority of whom are medical professionals) spend half a day on WM didactic education then compete in an eight-hour race that includes various navigational events including canoeing, hiking, ropes courses, and management of various medical scenarios.1 Teams of EM faculty and residents compete in nearly every MedWAR — often winning against teams of first responders. While many medical students, residents, and physicians have participated in MedWAR races, few hospitals or residencies have incorporated this sort of event into their training programs.

A related event, not specific to WM, is the Simulation Wars (SimWars) competitions held at national conferences. SimWars pits teams from various universities or disciplines against each other in competition to solve medical situations in front of an audience.3 These events are now held at EMRA and SAEM conferences.

Table 1.  Themes and Scenarios from the 2011-2014 Winter Wilderness Medicine Races at the University of Iowa, Carver College of Medicine

Races as an Educational Method

Races and competitions remain a novel method of training medical students, residents, and faculty. Traditional training methods include didactic education, procedure clinics, and simulations. One of the cornerstones of many educational programs is simulation. The ability for students to learn new skills in a protected, “psychologically safe” learning environment has been demonstrated to be an effective method of medical education;4 however, simulation competitions, which are less “safe” may be more realistic in that medical decisions are made under stress and errors have negative consequenses.3 Nonetheless, even simulation competitions fail to replicate the environment in which most WM takes place — the outdoors.5 Races could be a more realistic way to train WM students at all skill levels because the race adds a sense of urgency, stresses of battling the elements, difficulty in locating victims in the wilderness, and physical and mental fatigue.

Since 2000, there have been dozens of MedWARs and other WM races, but does a race actually improve participant knowledge or skills? Little research has been done regarding this question. One study, by Drs. Irons and Dery, assessed performance on a complex scenario before and after one MedWAR in 2011.6 The authors found that the MedWAR experience significantly improved performance on both the scenario and the written test, indicating that the race may be an “effective teaching platform.” Furthermore, research at the University of Iowa shows improved performance on multiple-choice WM knowledge tests by first- and second-year medical students after completing the race (unpublished data). Further research is warranted to identify whether this educational format is transferrable to real-world situations and patients. In the meantime, races remain an educational alternative to the more traditional classroom setting and a fun way for medical students, residents, and staff physicians to gain practical experience in WM.

”¦We frantically scramble down the hill, arranging ourselves around the mannequin and firing questions at the scenario proctors. After being given vital signs and the exam, we diagnose the patient with a sucking chest wound and a pneumothorax.

Sifting through our backpack filled with our ten essential items, we splay them across the packed snow. The plastic seal around the box of matches is trimmed into a four-by-four-inch square and tape adhered to all but one corner of the penetrating chest wound, creating an impromptu flutter valve. After a small educational session with the proctors, we glance at the map and snake through the woods to the next scenario. Five more scenarios and kilometers later, we barge into the wood-stove-heated lodge, better known as the finish line.