A 20-year-old female presents to your city hospital emergency department complaining of two days of subjective fevers, chills, diffuse muscle aches, as well as noticing painful swelling of her right cheek. Her review of systems is otherwise largely unremarkable. She was born in the United States, has not traveled recently, has no TB risk factors aside from living in a group setting in her local college dorm, and was fully vaccinated as a child.

She is well-appearing and has normal vital signs other than a temperature of 100.8 F. On exam she has unilateral, mildly tender swelling of the right side of her face. It’s not particularly erythematous compared to the left cheek. There is no fluctuance or induration, and it does not appear markedly swollen inside the mouth. She has good dentition and no lymphadenopathy.

Diagnosis
The differential diagnosis for a unilateral glandular, soft tissue, or lymph swelling of the face and neck is not terribly large. The area of concern isn’t expanding or pulsatile, so a dangerous vascular pathology is unlikely. The dangerous deep space infections, like Ludwig’s angina, are unlikely because it is unilateral above the mandible without associated trismus, voice changes, or drooling. The relatively quick development suggests against malignancy. Sjögren’s syndrome, or sarcoidosis are possible in the right clinical context. She has infectious signs and symptoms, without fluctuance which makes abscess unlikely and a bedside ultrasound did not demonstrate a fluid collection, or sialolith. The most likely diagnosis is parotitis, which can be unilateral, or bilateral. As with any parotitis, mumps ought to be considered.

In 25% of cases, the swelling is unilateral, though in many cases one side will present symptomatically prior to the opposite side. Swelling typically peaks on day 3 of the illness and subsequently improves. It can often be confused with lymphadenopathy, though mumps more characteristically swells anteriorly to the angle of the mandible which can obliterate the ability to palpate the angle of the mandible, and may cause protrusion of the ear.

Mumps is a paramyxovirus diagnosed best by viral nucleic acid PCR. Blood serologies for mumps IgG and IgM are often “send-out” style labs and are complicated by the patient’s vaccination status and length of illness.

Treatment and Complications
Mumps, like many viral illnesses, is typically self-limited and only supportive therapy is necessary. Use warm, or cold compresses in addition to NSAIDs for discomfort. In the vast majority of cases, admission, or further therapy is unnecessary. Worrisome complications in vaccinated individuals such as encephalitis, orchitis, or sensorineural hearing loss are rare, but aseptic meningitis remains the most common complication in 1 to 10% of cases. Approximately one-in-three to one-in-five unvaccinated patients develop orchitis typically 7 to 10 days following parotitis, compared to orchitis only occurring in 7% of vaccinated patients.

The virus is thought to be most often contagious from 2 days prior to the onset of parotitis to 5 days after. Typical isolation recommendations include avoiding close contacts from the time of diagnosis until five days after the onset of parotitis. Vaccination with a third, “booster” dose in addition to the two-dose typical MMR series may be helpful in reducing the likelihood of infection in close contacts but does not offer an added benefit to the infected patient.

Reporting
City and state health departments like to track the incidence of vaccine-preventable communicable diseases. Mumps is not a mandatory reportable illness or outbreak to the CDC which is defined as three or more cases linked by time or place. However, the CDC does track data and cases should be reported to your local health department. In New York City, the health department performs testing to confirm the diagnosis and continues routine follow-up with the patient after hospital discharge. Since viral shedding occurs before the typical viral syndrome and respiratory symptoms, contacts should be monitored for illness development. The incubation period for the virus ranges from roughly 2 to 3 weeks.

Discussion
The recent popular discussion of measles has placed the focus on one of the three viruses contained in the typical MMR (measles, mumps, and rubella) vaccine series, but not the rest. The MMR vaccine was introduced in 1989, which resulted in a 99% decrease in reported cases of mumps. Cases occur throughout the world, most commonly in late winter to spring. Mumps cases are on the rise since 2006 both in overall numbers and in number of outbreaks reported to the CDC.

In the United States, many outbreaks and several thousand cases of mumps have occurred over the past 20 years, the largest of which involved 3,000 cases in a tight-knit community in rural Arkansas in 2016. From January to July 2019, 1,799 cases have been reported in the United States, involving 45 states and the District of Columbia. 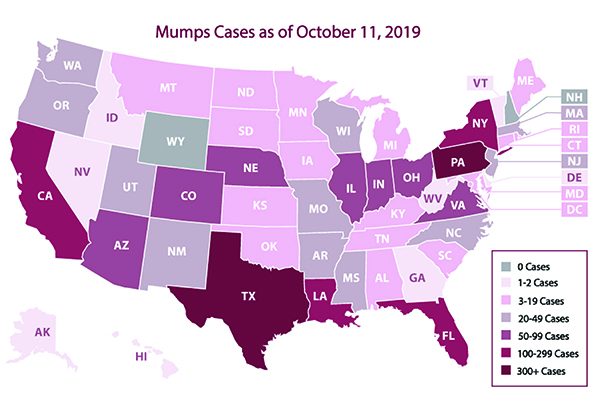 Cases have shifted from once being a common childhood viral illness to one of young, vaccinated adults. This suggests the possibility that vaccine effectiveness declines with time. The MMR series is 2 vaccines, thought to be approximately 78% effective at preventing disease after the first vaccine, and 88% effective at preventing disease following the second vaccine in the series.