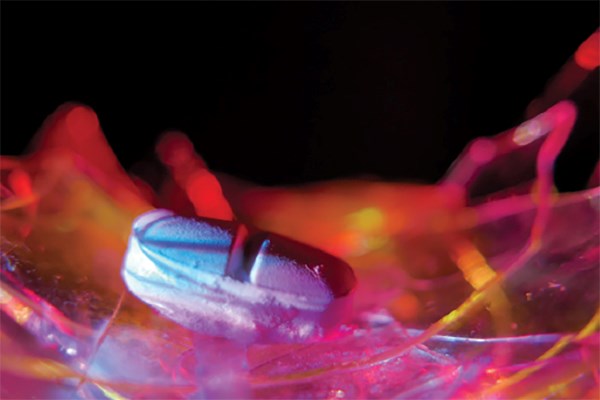 Gamma-hydroxybutyrate (GHB) is a central nervous system depressant that emerged in the 1990s as a popular “date-rape” drug.1

In response to the drug’s high potential for abuse, it has been classified as a schedule I controlled substance in the United States.2 On the street, slang for GHB includes G, fantasy, grievous bodily harm, juice, liquid ecstasy, liquid E, Georgia Home Boy, scoop, and many others.

Mechanism of Action
GHB is a central nervous system depressant that interferes with GABA transmission by binding to and activating GABA-B receptors in the brain. Upregulation of GABAergic tone is responsible for GHB’s sedative properties.

How is GHB Used in Society?
A recent story out of France brought the seemingly forgotten date-rape drug back into the limelight, citing rising recreational use that resulted in 10 drug-induced comas and 1 death.3 A once popular component of dietary supplements used by bodybuilders to increase gains, the drug soon became known for the euphoria, altered sensorium, and enhanced sexual drive associated with its use.4 As a result, GHB gained traction among ravers, partygoers, and nightclubs. The most common method of ingestion is consumption in a liquid.

Outside the realm of recreational use, GHB has been used to treat cataplexy and alcohol withdrawal syndrome.  A 2007 study showed that those who received a combination therapy of GHB and naltrexone were better at maintaining abstinence than those who received either treatment modality alone.5 As a result GHB is now registered as Alcover in Europe and used to alleviate alcohol withdrawal symptoms and maintain abstinence during detoxification.6

What is the Clinical Presentation of Acute GHB Toxicity?
Exposures to GHB range from mild to life-threatening depending on the dose and individual tolerance. GHB is rapidly absorbed with an onset of action 15-30 minutes post-ingestion, in addition to a short half-life of 30-50 minutes lending to its desirable quick and short effects.1

These pharmacokinetics paint the classic story of GHB intoxication you may see in your ED – “you are about to intubate a comatose patient and they wake up suddenly.” Case studies of acute GHB toxicity in the emergency department found that nausea, bradycardia, and decreased consciousness were the most common presenting symptoms.7,8

While euphoria, happiness, and increased sexuality are most commonly reported by users, the narrow therapeutic window of GHB makes more dangerous outcomes possible with even a small increase in dose.1,5 For example, an increase in dose from 3-4 grams taken orally can be the difference between successful treatment of alcohol withdrawal symptoms and loss of consciousness.9

GHB overdose has been associated with ataxia, seizures, respiratory depression, altered consciousness, and/or coma.1,5,10 The majority of those presenting after acute intoxication were discharged within 6 hours, although intubation and hospital admission and treatment has been reported (intubation rates varied from 10-57% among different studies).1,9,11 Co-ingestion with alcohol, amphetamines, and other illicit drugs is common and should be considered in the setting of GHB overdose.8,12 In one study, coingestion with alcohol resulted in more frequent episodes of hypotension, oxygen desaturation, and vomiting.13

What is the Treatment?
There is currently no accepted treatment modality for the reversal of acute GHB intoxication. Treatment is centered around supportive care with close monitoring of vital signs as well as cardiovascular and respiratory symptoms. Physicians should be prepared to intubate, although spontaneous recovery typically occurs within 5 hours of ingestion.8