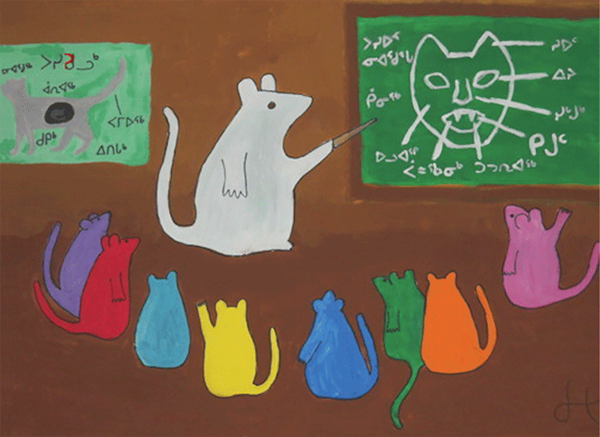 I Smell a Rat: Advocating for Resident As Teacher

It looked like a scene from a horror movie — tiny bones scattered over the kitchen table vaguely resembling an amateur archeological adventure into a pet cemetery. A pair of femurs sat in a diminutive glass that smelled of a high school swimming pool, while a wire string of vertebrae lay on a floral print paper towel still covered in chunks of cartilage and flesh.

“I wonder what on earth is going on in here?” my grandmother asked with a concerned face from our hotel in Fort Lauderdale.

“Science!” I retorted with a big grin. It would take me nearly 2 weeks to fully reconstruct the chicken skeleton, and I certainly wasn't going to lose time while on vacation.

This wasn't the first idea that had been inspired by one of my favorite biology teachers, Ms. Henry. For example, there was also the time I captured and fostered an “antlion” (Google it; you won't be let down), and the time I spent hours trekking through a field of high grass with the goal of gathering every order of insect, only to be completely devastated when my cat decided to eat half of them.

Collectively, these unconventional experiences were what increased my fascination with learning. Often the highlight of each activity was realizing how much I had actually learned by completing the process. For example, not only did I go through 5 chicken carcasses, but I simultaneously became a near expert in preparing every type of chicken dish imaginable. Chicken lollipops, anyone?

This passion for education has carried over into my medical career. And while not everyone loves education theory as much as I do, residents must own the responsibility of positively impacting the learning experience of those behind them in training.

Sure, I could quote the literature on the qualities of effective teachers or say something controversial like how I find most lectures boring and ineffective. Or I could spend time discussing the subtle differences between pimping and the Socratic method. But at the end of the day, it may not be enough. If Ms. Henry taught me anything, it was to be bold and creative.

So, what I ask of you is simple, really: Be a RAT. And I don't just mean crawl around in sewers looking to mentor turtles who eat pizza. I mean embrace the qualities of a rat — namely, ambition and creativity. Actively seek out new ways to teach your fellow residents. Can't get the IV? Let them practice on your pipes. Not quite comprehending the intricacies within hypothermia staging? Dip yourself into a bucket full of ice during conference. I mean, what's the worst that can happen?

But seriously. You already know how to do this. Think back to the first ECG you saw, or that first truly septic patient. Find an innovative way to disseminate the knowledge to your learner. And I don't just mean the medical facts, but all of the experiences that go along with it.

According to Chinese zodiac legend, 13 animals raced across a river, and their place determined their position on the calendar. It was the rat, with its positive attitude and flexible mind, who rode on the ox's back and touched the shore first. Be creative like the rat, but instead of literally jumping on your mentor's back, emulate their qualities in order to be a better and more effective teacher.

Your interns will thank you.

Now, please excuse me while I go snack on a bag of cheese.