How competitive is our specialty, really? There are a number of ways to answer this question. The best source of data can be found in the annual publication of the NRMP Results and Data Main Residency Match. This document contains thousands of data points and can seem overwhelming. However, if you focus on the right places, it paints a clear picture.

Each year, the NRMP document contains a table that presents all the specialties and their Match numbers. Historically, to answer the competitiveness question, many organizations have used the “% filled” column. This shows what percentage of all positions available in a particular year were filled during The Match. Although this number tells part of the story, it may be misleading. It doesn’t take into account how many applicants applied for those positions. It is really answering “How successful was The Match algorithm for that specialty?” rather than answering “How competitive is that specialty?”

A better way to answer the latter question may be to take the number of available positions and divide it by the total number of applicants, giving the ratio of “available positions per applicant.” A smaller ratio here would suggest that the specialty had fewer spots to accomodate all its applicants, making it more competitive. Conversely, a larger ratio would suggest that the specialty was less competitive.

Using the “available positions per applicant” ratio, where does EM rank among the specialties? Let’s look at the numbers.

Reviewing published data from 2011 to 2019 we can calculate each specialty’s ratio. Table 1 shows the raw numbers for each specialty during the last decade along with the average. For example, in 2010, EM had enough positions available to accommodate 76 percent of applicants to the specialty. This has remained relatively stable over the last decade; EM has accommodated between 72 and 82 percent of applicants each year. 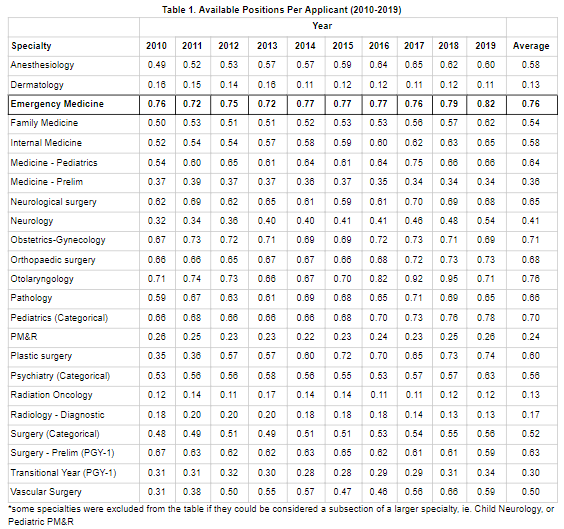 If we take the average over the last ten years, we can figure out our specialty’s competitiveness over the last decade. Figure 1 shows how EM compares to the rest of the specialties and, as you can see, the results are surprising. Using “available positions per applicant” as a measure of competitiveness, EM ranks as the least competitive of all specialties - along with otolaryngology. 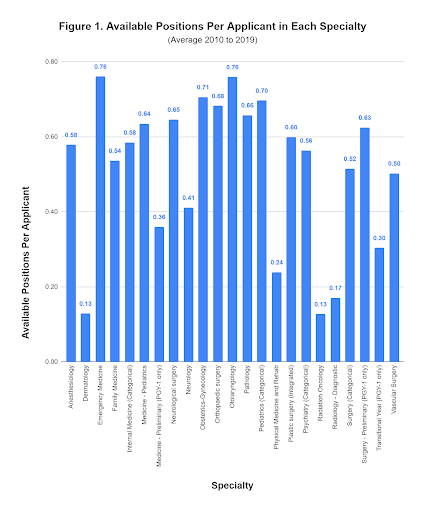 With EM and other specialties traditionally thought of as “competitive” ranking less competitive according to our analysis, it makes us wonder if perhaps we are asking the wrong question. Maybe instead of describing the data as a measure of “competitiveness” we should think of it as “self-selectiveness”. Perhaps the reason EM and otolaryngology both come at 0.76 “available positions per applicant” is not because it is easy for anyone to match into these specialties, but rather because those who end up applying are well-informed, competitive applicants who have self-selected and are suited for these fields.

We could also account for this relatively high ratio in EM by considering the recent increase in new ACGME-accredited residencies. In addition, programs that were historically accredited by the American Osteopathic Association (AOA) have merged with the ACGME in the last few years. Figure 2 shows the number of new EM residencies each year along with the cumulative total since 2011, with a noticeable spike starting in 2016. One could argue that by opening more spots, EM is creating more opportunities for applicants to match and enter their specialty of choice. 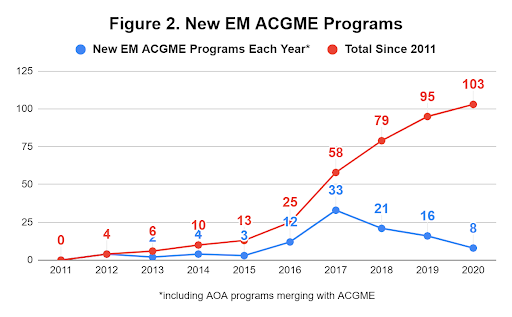 In conclusion, if you consider yourself a strong applicant for EM based on the other sections of the NRMP Match data and the EMRA and CORD Student Advising Guide, and you have applied strategically based on this, you should be assured that not only will you most likely match, but the likelihood of this has been trending favorably for you in the last decade compared to other specialties.

To all of our fellow fourth-years out there, we wish you the best on your interview trail and on Match Day!